The Story of Saint Gennaro 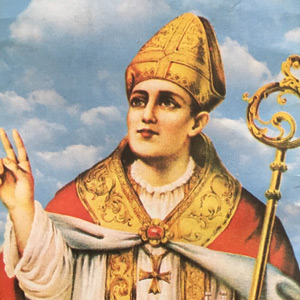 Saint Gennaro was Bishop of Benevento, Italy, and died a martyr in 305 AD during the persecution spearheaded by Emperor Diocletian.

He signed his death warrant when he visited the deacons, Sosso and Proculo, and the laymen, Eutichete and Acuzio, in jail.

The Proconsul, Timothy, had Gennaro arrested. He underwent torture without wavering in his resolution to remain loyal to Christ. He was thrown headlong into a furnace, but by the grace of God, he come through unscratched.

Furious, the agents beheaded him. His body and the severed head still dripping blood were gathered up by an old man who wrapped them reverently in a cloth. An old Neapolitan lady collected the blood with a sponge and filled a phial with the precious liquid.

The body of Saint Gennaro is preserved in Naples, where he is honored as the city's principal patron.

The Neapolitans pray to him for protection from fires, earthquakes, plagues, droughts and the eruption of Mt. Vesuvius. In every emergency Saint Gennaro is their powerful champion and universal helper.

His blood, which is normally solidified, liquefies twice a year on the first of Sunday of May, the feast of the transfer of his relics, and on September 19, the anniversary of his martyrdom.

The History of the Feast of San Gennaro, NYC

At the turn of the 20th century when Italian immigrants settled on the lower east side of Manhattan each region settled on a different street. The Neapolitans settled on Mulberry St.

In 1926 with keeping their Neapolitan traditions they decided to have a one day block party for their patron saint and protector of Naples, San Gennaro which continued year after year something that has now and for decades become not only a New York icon but a world known 11 day event which stretches throughout 11 blocks of the Little Italy neighborhood.

For generations this feast has always been an important part of our neighborhood not only representing the Saint Himself but also representing our ancestors, our culture and our traditions.